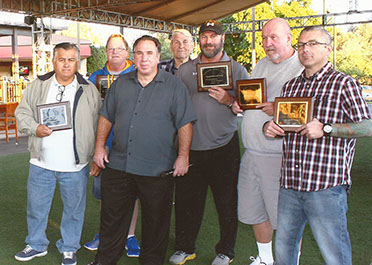 George McDermott Champioship at Fairplex, at the Off Track Wagering Center of the Los Angeles County Fairgrounds ON SATURDAY DECEMBER 29, 2014.

Once we held the Quarterfinals, we invited those players and the stronger runner ups to the Semi-Final Round held at the Starting Gate in Los Alamitos on Saturday December 6, 2014.

George McDermott playing at his home town qualifying spot (Starting Gate) won the Semin Final competition and he and the other County Champions along with the rest of the top finalists from the Semi-Final Round were invited to play for the Championship at Fairplex at the Off Track Wagering Center of the Los Angeles County Fairgrounds.

On the Video, you will see how George McDermott comes from way behind (just like at the Semis) to win the 2014 Traveling Trivia Sports Show State Championship for California in a tie-breaking Overtime! You will also see a short interview segment with some of the Finalist Contestants at the HALFTIME of the Contest. In the interview with Champion George McDermott, you will see how the topic of a possible come from behind win at the Semis is discussed with George and Traveling Trivia Sports Show Host Nick LaCapria.

Qualifying is going on right now at many of Nick LaCapria's regular stops for the 2015 Championship!  This years Championship Round will be held at the Starting Gate in Los Alamitos on the last Saturday in December. If you have interest in qualifying for the 2015 Sports Trivia Championship, visit a stop when Nick is there or send an e-mail to this website.